I have not yet finished reading the first volume of the newly translated masterpiece of Petrus Van Mastricht, Theoretical-Practical Theology, translated by Todd M. Rester, (Grand Rapids, MI: Reformation Heritage Books, 2018) but I have read deeply enough into this volume to know that it is very good. 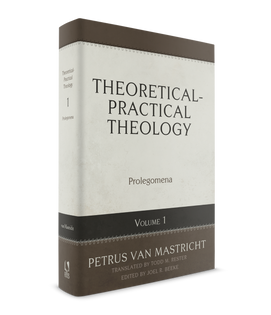 In the age of the internet where seeming everything is apparently a click away, (especially with data mine treasures like the Edwards website from Yale), we sort of expect to have access to every academic source we could ever need. It would seem justifiable to believe that someone, somewhere out there on the interwebs had already done the work of translating this excellent work of classical Reformed theology into modern English. But sadly, except for a few items such as Mastricht on regeneration, and a short essay on preaching, this was not the case.

Believe it or not, but this seminal work on Reformed theology from one of the esteemed Dutch masters is just this year finally accessibly for reading by many in the English-speaking world for the first time in history.

This volume is going to be followed by as many as six more volumes which will fill out the whole complete set. I have reason to believe that this series will shortly take its place in seminaries and pastoral libraries alongside such excellent Reformed multi-volume sets as Turretin and Bavinck; both of which also required previous massive labors of translation to bring to many of us on this side of the Atlantic.

This volume on “prologomena” (or foundational assumptions and beginning points) is prefaced with several contemporary statements of the work’s historical importance. Editor Joel Beeke and translator Todd Rester both make meaningful comments about the impact they hope the work will have. I am especially thankful for Todd Rester, whose skill is clearly evidenced in the smooth reading of this English edition. The layout, design, and even the typeface make this work wonderful to read. But it is Rester’s skill in bringing the original Latin (and Dutch editions) into modern English that makes this work so delightful to both the eye and mind.

Also, the volume comes with an introduction to Peter Van Mastricht’s life by Adriaan Neele, as well as a somewhat detailed funeral oration given by Henricus Pontanus at the author’s own time of death. Together, these essays help the uninitiated reader to gain a handhold on the biographical life of the esteemed writer who was doubtlessly better known on the continent than across the Atlantic.

Even though this first volume barely gets into Peter Van Mastricht’s actual theological system–we don’t get much further than defining theology and introducing Holy Scripture in this first volume–we can see the method and style of this historic Dutch theologian beginning to unfold. We can also clearly see his heart. As I read the first parts, what became plain to me was that Van Mastricht did not see theology as merely an academic or intellectual enterprise. No, theology plainly and profoundly affects mind, heart, and life. Over and over, PVM insists that theology, when done well, produces a mature believer who “lives to God through Christ.” Much of his work is biblical, almost in the same way that William Ames filled his Marrow of Theology with citation after citation of Scripture. It is fuller though and less punctiliar, as the author easily and naturally toggles back and forth between his own assertions and Scriptural citations. Nary a page will proceed without plenteous Biblical citations and proof texts.

In every section, we can expect to see four things from PVM: (1) an exegetical exposition of a Biblical passage, (2) a doctrinal definition given in somewhat classical form, (3) an elenctic question and answer conversation or debate, and (4) a practical application for the heart and life of the believer.

The exegetical sections tie each main theme directly to Scripture. Clearly, PVM wants to be biblical (even bleeding bibline, as Spurgeon once said!). After that, he attempts to both define the doctrine that he is working through and show its place and relevance among the other Christian doctrines. Or to say it another way, he attempts the process of systematizing the categories of theology within their proper relation and function. Next, he attempts to answer questions that his students, or even opponents, would ask. Here, he often challenges himself deeply to work through the opposing arguments of pagans, heretics, Arminians, Lutherans, Socinians, and atheists. Finally, and this is where his heart for the Lord really shines through, PVM makes special attempts to apply the doctrine at hand to the heart and life of his readers; often speaking to students and ministers, but never straying too far from the lives of common, everyday Christian believers. Each of these is necessary to doing Christian theology, and as I read, I often thought about how this fourfold method would preach and teach well in the church chancel or seminary classroom. It seems like such a wise way to articulate doctrine in this method, and I can imagine myself preaching sermons or teaching lessons with this fourfold method in the future.

As I said above, I have not yet finished the work–and will have several more volumes to go to do so–but it is already endearing itself to me as an especially heart-felt, Biblical, and practical work of Reformed theology. Jonathan Edwards certainly liked it. We know this was Edwards’s favorite book because he wrote in a letter to Joseph Bellamy, dated January 15, 1747, the following words:

As to the books you speak of: Mastricht is sometimes in one volume, a very thick, large quarto; sometimes in two quarto volumes. I believe it could not be had new under eight or ten pounds. Turretin is in three volumes in quarto, and would probably be about the same price.1 They are both excellent. Turretin is on polemical divinity; on the Five Points, and all other controversial points; and is much larger in these than Mastricht; and is better for one that desires only to be thoroughly versed in controversies. But take Mastricht for divinity in general, doctrine, practice, and controversy; or as an universal system of divinity and it is much better than Turretin or any other book in the world, excepting the Bible, in my opinion. (WJEO 16:217).