Edwards scholars and friends of this blog have two major projects to get excited about, and the good news is that both are in the final stages of editing and/or production.

The first, The Miscellanies Companion is possible to get by Christmas (no promises!), but we are hoping against hope that it might land in some stockings, or under some Christmas trees this year. The second, Jonathan Edwards Within the Enlightenment, will be released sometime next year in 2019.

Here’s a bit about each one…

The Companion is edited by Dr. Rob Boss, the director of publication of the JESociety which has been putting together some very cool and uber-relevant works in recent days.

(Check out a few of JESociety’s earlier publications here).

Interestingly, this project not only features some excellent scholarship, as a world class team of writers dig into Edwards’s “Miscellanies,” but it also features some stunning interaction with cutting-edge computer digitization created by Dr. Boss. This will allow Edwards scholars to cross reference ideas and concepts in Edwards’s “Miscellanies” as never before. The written book will correspond to the digitization Boss has created in meaningful ways, and the big idea is that this will blossom into new discoveries in Edwards’s mind, as the Northampton Pastor organized his entire system of thought around tensions and connections that scholars are just now being able to put together.

Here’s a brief video intro, followed by the cover art.

Jonathan Edwards Within the Enlightenment

This second exciting work was formerly given the tentative title, Jonathan Edwards and the Dark Side of the Enlightenment. If you have been expecting this one, make sure to note the title change. This is part of the exciting new series, “New Directions in Jonathan Edwards Studies.” Here’s a teaser that I recently received from John T. Lowe, one of the editors of this coming project.

As part of the New Directions in Jonathan Edwards Studies, this volume aims to examine areas where scholarship has either been previously assumed or unexplored entirely. Most of the time we only hear about one side of Edwards. Often forgotten are the other aspects of his life and context shaped—or not shaped—by the Enlightenment. For example, this collection of essays will consider his pro-slavery views, abolitionist legacy, confrontation with witchcraft, pain, populism, feminine death-bed narratives, how his world was full of violence, and several other topics.

The unique collaboration of authors representing both North America and Europe are graduate students and seasoned scholars across multiple academic disciplines. Our hope is that this volume will encourage research among students of Edwards to seek new perspectives of his life and context in history, theology, literature, culture, and the like. We are very excited to move forward in the final steps of this project with Yale and V & R.

As of press time, contributors were making their third round of edits and final tweaks. This should be sent to the publisher any time now with a goal of hitting the ink press early in the new year. We will eagerly keep you posted on this project.

Recently, I had the opportunity to record a live episode of the Calvinist Batman podcast with its mysterious and powerful host, “Bruce.” We gathered in the fellowship hall of my home church, Faith Evangelical Presbyterian Church in Brooksville, Florida, set a couple of high tech mics with the help of our sound team, and recorded an episode before a live studio audience of about forty people, mostly church members. 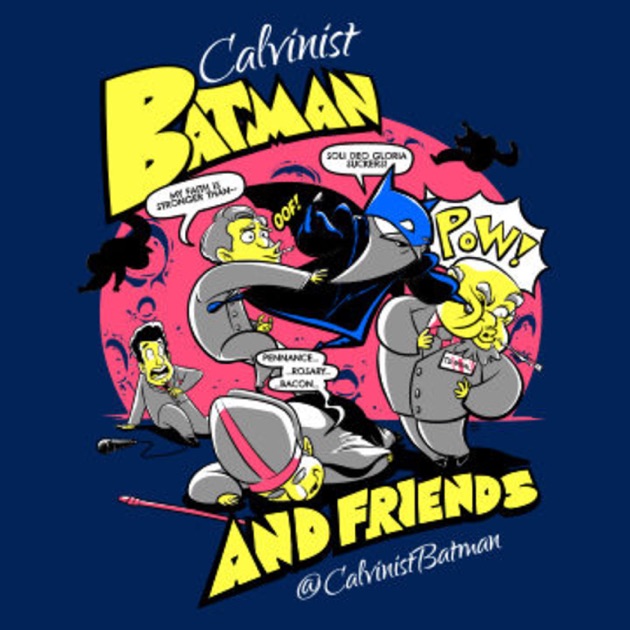 Comic books and puritan theologians seem like a bit of a strange combination, but on this podcast forum, it works very well. Each episode begins with some lighthearted banter about comic books, superhero movies, and other cultural curiosities. In the episode that I was privileged to record, we began talking about my own father’s epic comic book collection from the Silver Age of comics, especially my father’s prize possession of Spiderman 1-10. Here is also a quick glimpse of my dad’s collection of Fantastic Four 1-10.

We progressed on, then, to discuss matters of more spiritual significance as we discussed Jonathan Edwards and his theology of joy. In our conversation, I was able to share much of what I had gleaned from my doctoral studies of Edwards’s theology of happiness, which I distilled into book form in my recent title, A Theology of Joy.

Towards the end of our time together with podcast master Bruce, we even discussed some dark topics like depression. You can check this out too as a bonus Q&A episode.

Check out the full episode here!