Yale Philosopher John E. Smith once suggested that the sum of Jonathan Edwards’ thought could be considered “one magnificent answer” to the question “What is true religion?”. Without question, Edwards’ most comprehensive attempt to formulate that answer is found in The Religious Affections. These so-called “affections” serve as the “springs of motion” that propel all of human activity: “In everything we do, wherein we act voluntarily, there is an exercise of the will and inclination; it is our inclination that governs us in our actions.” (25) Godly affections are those found specifically inside the church. These religious affections are the “fervent exercises of the heart” the Lord bestows upon His church for the promotion of “true religion.” Still, due to its timeless instruction on human nature and the heart of true worship, Religious Affections continues to transcend age and creed in its ability to speak to the Christian life. The following are three truths that Edwards’ magisterial work delivers to the modern church for meditation and practice.

1. KNOWLEDGE OF GOD’S WORD AND TRUST IN ITS AUTHORITY

In his book Jonathan Edwards and the Church (2013), Rhys Bezzant eliminates the notion that Edwards’ ecclesiology was peripheral to his soteriology: “The church is not an afterthought in the otherwise individualist plans of God, but is the focused domain where God’s promises, presence, and purpose are to be discovered.” (ix) These three forces came together in the preached Word. The puritan religion was the religion of the Word and the one to which Jonathan Edwards wholly subscribed. As Edwards makes clear in The Religious Affections, any kind of accurate self-portrayal must begin in the Scriptures. Knowledge of self begins with true knowledge of God: “One who knew the heart of man better than we know our own hearts, and perfectly knew the nature of virtue and holiness, was the author of the Scriptures.” (229) God is the protagonist to the divine metanarrative and the one to whom we must continually be directed through His Word.

Throughout The Religious Affections, Edwards is insistent upon the fact that the Scriptures are God’s merciful self-revelation. Likewise, inspiration and illumination are both accomplished through the Spirit. Upon this divine authority, Edwards assures his readers that the Bible is our only trustworthy source in the things pertaining to salvation. Sinners must be “willing to have the Word of God rather than their own philosophy, and experiences, and conjectures, as their sufficient and sure guide.” (88) The authority of the Word is an issue that Edwards knew to be paramount in his own time and in the years to come: “The things revealed in the Word of God are so great, and so infinitely more important than all other things, that it is inconsistent with human nature, that a man should fully believe the truth of them, and not be influenced by them above all things in his practice.” (308) This is the confidence that Edwards had in the Word of God preached and believed: “Truly to see the truth of the Word of God, is to see the truth of the gospel.” (220) Edwards made a distinction between simple “notional” knowledge of the Gospel and a knowledge that “relishes and feels.” Biblical knowledge unaccompanied by a sense of holy beauty is worthless, according to Edwards. Conversely, Edwards exhorts his readers to seek “living upon Christ, and not upon experiences.” (103) Hence the Word of Christ is axiomatic to any ministry seeking to stave off rational and fanatical extremes. 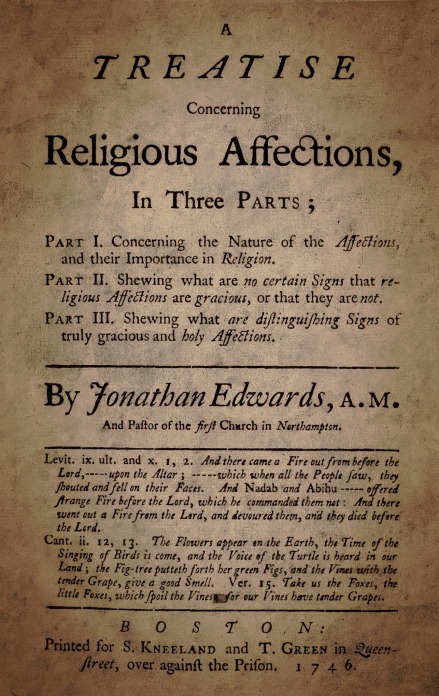 2. WE DO THAT WHICH WE DESIRE MOST.

Long before John Piper invented the phrase “Christian Hedonism,” Jonathan Edwards introduced us to the “Religious Affections.” One of the truths contained in his magisterial work is that anywhere sinners have interests and exercise their wills, there is necessarily an inclination that dictates their behavior. According to Edwards, “Those acts which men delight in, they necessarily incline to do.” (317) These inclinations are what distinguish our pleasures from our displeasures. For example, if a young woman is bitter toward her parents when they forbid her from some unsavory activity, her displeasure must necessarily arise from an inclination to engage in that activity. Edwards knew that our loves define our hates, and our pleasures our displeasures.

Affections must have an object. Even a hardened sinner understands that to be “affectionate” implies someone receiving affection. The church’s primary task is therefore to designate Christ as the object of our affection. For unregenerate sinners in love with the world, Jesus cannot compete for the seat of their affections unless the seat-holder is dethroned. Therefore the “more vigorous and sensible exercises of the inclination and will of the soul” must find their telos and their satisfaction in Christ Jesus. Only then will human appetites be satiated.

According to the pastor from Northampton, “If men’s affection to God is founded first on His profitableness to them, their affection begins at the wrong end; they regard only for the utmost limit of the stream of divine good, where it touches them and reaches their interest, and have no respect to that infinite glory of God’s nature which is the original good, and the true fountain of all good.” (169) Our affections must never rest supremely in those benefits of Christ, but rather in Christ alone.

In order for the affections to rest in Christ, one must know Christ and His resurrection. In short, the Gospel must be fully understood and embraced. Edwards opines, “A man must first love God, or have his heart united to Him, before he will esteem God’s good his own, and before he will desire the glorifying and enjoying of God as his happiness.” (166) Gospel-less, ethical teaching will not suffice for transformative ministry. The concept of Christ-centered sanctification, for Edwards, was wrapped up in the idea of holiness. In The Religious Affections, Edwards’ eschatology informs his view of holiness, which in turn informs his view of humility. “It was never God’s design to give us any rules by which we may certainly know who of our fellow professors are His, and to make a full and clear separation between sheep and goats. On the contrary, it was God’s design to reserve this to Himself as His prerogative.” (120) The sheep and goats are indistinguishable today just as they were in Edwards’ post-Awakening era. Consequently, the identification of tares and wheat should be reserved for God in the eschaton. True religion, according to Edwards, was the power of godliness (Deut. 30:6). The pursuit of that godliness becomes the Christian mission in light of the mystery of election. This should prompt ministers of the Gospel to exhort their students to pursue holiness and to eschew licentious Christian living. According to Edwards, “Holiness, which is as it were the beauty and sweetness of the divine nature, is as much the proper nature of the Holy Spirit as heat is the nature of fire.” (129) A true love of God must begin with a delight in His holiness, not one’s own. In this sense, Religious Affections offers its readers a proto-“Christian hedonism,” recognizing that our desires and God’s glory are not mutually exclusive but rather consonant with the Gospel itself.

Edwards has been called “the theologian of the first commandment” and with good reason. For him, love was central to theology: “For love is not only one of the affections, but it is the first and chief of the affections, and the fountain of all the affections. From live arises hatred of those things which are contrary to what we love, or which oppose and thwart us in those things that we delight in.” (36) In Edwards’ mind, love was the source of all affections, the well from which all inclinations were drawn. Love for God is the greatest commandment, and love for others the second greatest commandment. “Christians are Christlike,” Edwards remarked. (274) At the core of the Gospel message is love, and without love, one does not truly comprehend the truth of the Gospel. Edwards himself said in Religious Affections that he had no greater joy than to hear that his children walked in the truth. (329) Walking in that divine truth is epitomized by a life of love.

The love of God in His people is the means by which they are able to love others. And this is to His glory. A glimpse of God’s divine grace is the fire that ignites humble love for mankind. In Edwards’ mind, grace enables believers to see the beauty of God, to place him as the object of their affections. Therefore, in order to kindle a fire to serve, a pastor must place the glory of God as the supreme end of all ministry and life itself: “I know of no reason why a being affected with a view of God’s glory should not cause the body to faint, as well as being affected with a view of Solomon’s glory.” (60)

The glory of God was integral to Edwards’ very existence. It was all-encompassing. In fact, his extremely high view of Scripture was subservient to his extremely high view of God and His glory. He understood that nothing and no one else in the universe is worthy of worship other than God alone. For this reason, defining love in relation to God’s glory is ever so important. If sinners are taught that John 3:16 somehow means that they are deserving of God’s love, they will then carry a diminished view of grace. This naturally leads to a hidden belief in one’s inherent righteousness. On the other hand, when sinners are confronted with God’s glory as the determining influence behind salvation history, their worship is a humble worship. Loving a worthy God begins with an understanding of intrinsic human unworthiness. He is sovereign over all and set apart from all: “They that do not see the glory of God’s holiness cannot see anything of the true glory of His mercy and grace.” (183) At the bottom of grace and mercy is God’s glory.

Thirty years ago John Piper wrote a book called Desiring God (1986). In it he famously stated that “God is most glorified in us when we are most satisfied in Him.” The concept was something Piper called “Christian Hedonism.” Aside from Scripture, he has consistently credited the crux of the idea to his theological hero Jonathan Edwards. And perhaps, through the help of John Piper’s prolific pen, millions of Christians will be drawn back to the genius of Religious Affections – a masterful work that continues to deliver spiritual gems to the modern church.