Jonathan Edwards’s Freedom of the Will is certainly not the easiest piece of literature in the world, nor is it the most accessible treatise Edwards ever wrote. In fact, on my first pass through this incredible volume, I remember asking myself a few times during the journey “Is it over yet?”

Pressing on, though, we do come to some important insights as to the nature of the human will in relation to the sovereignty of God. As you may already know, Edwards had a very high view of the sovereignty of God, as a representative of high Calvinistic orthodoxy in his own day. In fact, Edwards argues in Freedom for a position called “compatibalism,” which is to say, that Edwards believes that God’s sovereignty is ultimately compatible with human freedom, rightly understood. 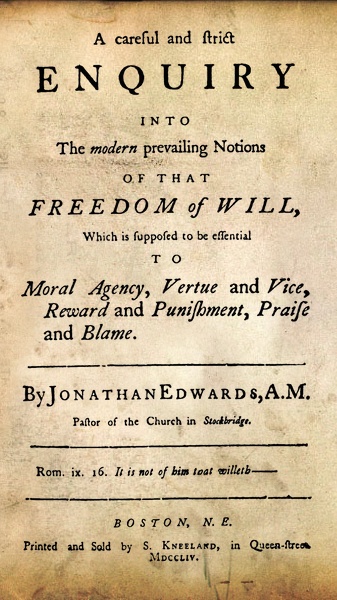 For Edwards, God is radically free. If we want to talk about free will as a philosophical concept, Edwards would suggest we begin with God’s free will. He alone determines the course of human events and indeed the outcome of all of our lives. But Edwards also believes that human beings always act in ways that are consistent with their own nature. We too are “free” to act according to our own impulses. Yes, God determines and controls all things, but nevertheless, humans are free to act in complete concert with their own strongest dispositions. In fact, we always act in harmony with our heart’s strongest desire at the time. But this, for us, is precisely the problem. We are sinners.

Here, Edwards introduces the concepts of moral ability and natural ability. Human beings, he says, are obviously limited in their natural ability. This corresponds to what we can do within our physical limitations in time and space. I cannot bench press more than 200 lbs any more, for example. Nor can any of us reading this blog post fly without the aid of aircraft. But moral ability has to do with what our soul will not or cannot do. A drunk (in Edwards own illustration) is certainly able to put down his beer (natural ability) but it may be that he does not have the spiritual capability to refuse another drop (moral ability).

This explains why some people receive the Gospel and others do not. Left to our own, we have the complete natural ability to receive Christ, but the problem lies in our lack of moral ability. Namely, our hearts are corrupt and will not come to Him for clemency. Edwards argues that what is needed is for the Holy Spirit to override that selfish impulse within us which refuses the grace of God by giving us a new living “principle” (Edwards’s stock term for spiritual quickening) in the very heart.

His own best illustration is as follows: Suppose there was a great king who had two men in prison. The first man desired to come and beg before the King. If he could, he would run straightaway to the throne room and beg for mercy and clemency. The problem in the first case, Edwards says, is that the bars and walls of the prison prevent him. He has the moral ability to repent, but not the natural ability. Some people, Edwards argues, mistakenly assume that Calvinism implies that God’s determination holds back willing penitents from repenting!

But this, however, is not really the case with fallen man.

No, for fallen man, the problem is exactly the opposite: Now suppose that the bars and prison door are wide open for our second hypothetical prisoner. Nothing hinders his coming straight to the King’s throne. The jail door is wide open. The guard beckons him on! Unfortunately, this second man hates the King. To repent would be utterly despicable in his own eyes. He would rather not bow the knee to the King, even if it meant his freedom. He would rather spit in the King’s face given the chance! His problem is not his natural ability – in fact nothing hinders his coming but his own heart. The problem is that he is not morally able to come. His is a spiritual problem indeed.

Thus, once again we see that divine grace is needful to change the heart of the prisoner. In this way, by distinguishing moral and natural ability, Edwards builds his case and upholds God’s sovereignty in salvation AND man’s responsibility to repent.

These ideas are not in conflict, but are in fact, “compatible.”