(Editor’s Note: This post originally appeared on Bible Design Blog on May 28, 2015).

Two famous men in Colonial-American history owned Bibles that had literally been cut to pieces and then stitched back together again.

The first, was Thomas Jefferson – more concerned with morality than divinity – who famously edited out the miraculous and the supernatural from Scripture. Hardly an orthodox Christian by any definition, Jefferson simply cut away the portions that he did not like.

The other man was the famous New England Puritan, Jonathan Edwards (1703-1758), considered by some to be the greatest scholar that America has ever produced. Edwards’s own rebound Bible had an entirely more sacred purpose – he took copious notes on nearly every major section of Scripture.

The story of this particular Bible is relentlessly fascinating.

What is the Blank Bible?

Dubbed by most (including Edwards himself) as the “Blank Bible,” the official title of the manuscript is technically “Miscellaneous Observations on Holy Scripture,” and can be found today in the Beinecke Rare Book and Manuscript Library at Yale University. There, you can see it yourself – possibly handle it even – provided of course that the curator is in a good mood, and that you lick the orange Cheetos powder off your fingers before touching it.

The Blank Bible is entirely unusual in construction: it is really two books in one. It consists of a large 9.5 X 7.5 inch blank writing notebook, nearly three inches in girth, into which an entire miniature King James Version of the Bible has been meticulously stitched. Bound in brown leather over board , the book literally looks like one larger volume ate a smaller one for dinner.

Picture something the size of an ESV Study Bible, but fatter at the top than the bottom. From the side view, it looks like a python trying to squeeze down a meal.

The smaller book, a 1653 King James Bible, printed in London by the “Company of Stationers” is a miniscule, double-column, AV with both side and center column references, along with some study notes provided by the publisher to boot. Someone (not Edwards) who was very skilled in bookbinding took apart both original books, first removing their signatures and cutting apart the individual sheets, and then splicing together the larger blank pages with the smaller text of the KJV. Finally, the boundary sewed the newer, larger work together as an irregularly shaped monolith. 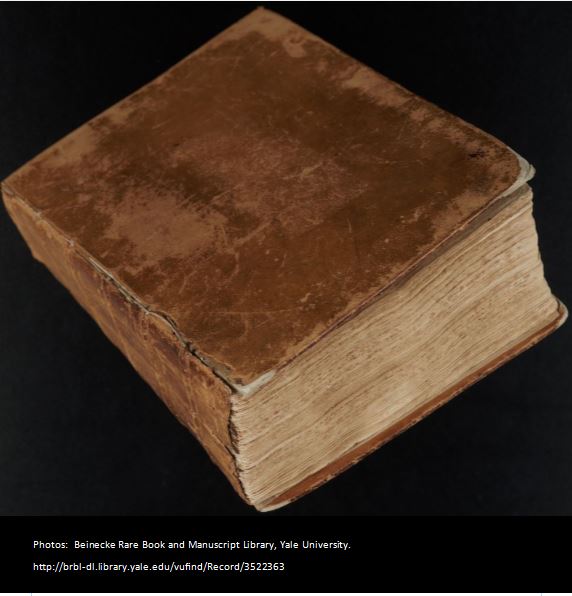 History of the Strange Apparatus

Apparently the Blank Bible came into Edwards’s possession through family: it bears the name and handwritten signature of his brother-in-law, Benjamin Pierpont, and is dated by the same in his own script in 1728. A young candidate for ministry, Pierpont never actually ended up being ordained unfortunately. Apparently, he came into some controversy with the local clergymen having acted “apishly” around the young ladies, and was dubbed unfit for public ministry. Sadly, he died sometime thereafter.

Clearly interested in owning the unique book himself – no others like it exist – Edwards obtained possession of the Blank Bible sometime around 1730, probably through the mediation of Sarah his wife. Whether Benjamin could see that his ministry career was going nowhere and gave it to Edwards himself before he died, or whether it came to Edwards as part of the deceased’s estate is unknown. However it came into Edwards’s possession, it had already collected around 70 of Benjamin’s own thoughts and comments on Scripture. No matter. All the New Hampshire Puritan would do is add another 5,506 entries or so over the next thirty years.

The Bible itself is still in remarkably good condition. Its high traffic wear is from daily use, not at all from neglect or abuse. One theory holds that the current cover is itself yet another rebind. The fact that the signatures appear to have been tightened up against the inner columns, resulting in a smaller gutter, suggests that it was used so much by Edwards that the minister again took it to a professional, who cinched the signatures even tighter, added a newer cover and sewed it up again for a third time. A note in the flyleaf from Edwards himself dating the book to 1748 (almost twenty years after he received it) may support that theory. 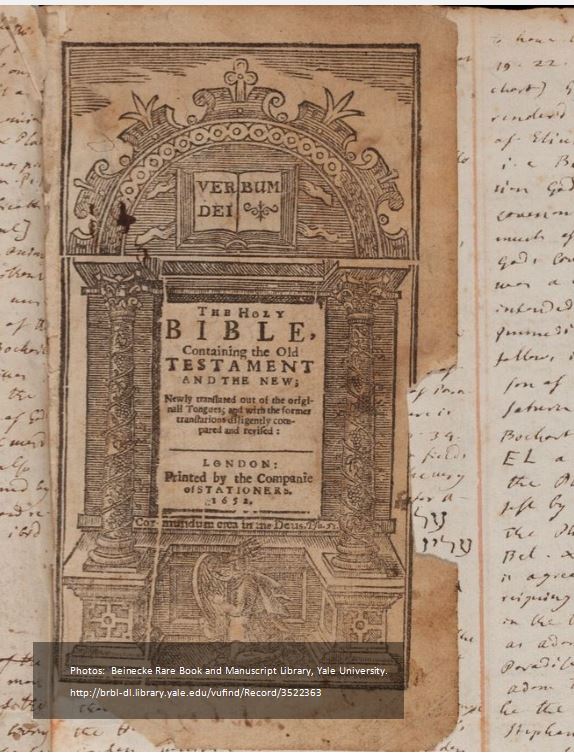 So You Want to Read it Huh?

In terms of its contents, the Blank Bible contains a treasure trove of information for Jonathan Edwards scholars to devour. As a matter of fact, some people are surprised to know that there are thousands of pages of Edwards’s materials that have still never been published. This volume, too, has only recently come into publication thanks to scholar Stephen J. Stein who meticulously transcribed Edwards’s nearly indecipherable handwriting into the 24th Volume of the complete Yale edition Works of Jonathan Edwards (2006).

This is a good news/bad news deal for eager readers, though. The bad news is that if anyone wants to actually read the thoughts of Edwards on various texts throughout the Bible in the published volume of the Yale Edition, they will have to fork over $225.00 claims to do so.

The good news is that the Jonathan Edwards Center at Yale University has graciously hosted the entire volume digitally, published for free on the internet, alongside a host of other Edwards manuscripts, sermons, and treatises.

Writing Your Own ‘Miscellaneous Observations’

For some, this unique book will create a desire to replicate a Blank Bible of their own. For those who are interested in creating their own ‘Miscellaneous Observations on Scripture,’ there are options. It may not be feasible to do what Edwards’s Bible managed to do – merge two existing volumes into one. But it may be possible to attempt what Edwards did in spirit at least. Today, high quality Bible publishers have given us a number of options for those who want to work closely with the sacred text: just like a Puritan!

First, consider a wide margin edition. I have written about the glory of these editions elsewhere as has Mark. While you may not be able to pour 5,506 entries into the space just over an inch wide on either margin, at least you won’t have to dip your quill into the ink to write every third letter either.

Second, Crossway is making some really cool journaling Bible options now too. Their new single column journaling Bible improves on the previous edition, now by reducing the text of Scripture down to one column instead of two columns. In this way, confusion between which column of Scripture you are referring to in the lined margin space is eliminated.

If neither of these options work for you, it is still possible to acquire loose-leaf editions of several major Bible translations. Although you’ll never get that sweet leather smell, a three ring binder will give you the ability to add notes as your collection of “Miscellanies” grows.

So, go make a “Blank Bible” like Jonathan Edwards! Just don’t edit out the parts you don’t like as did Thomas Jefferson and become “Sinners in the Hands of an Angry God.”

– Matthew Everhard is the Senior Pastor of Faith Evangelical Presbyterian Church in Brooksville Florida. He is the author of Hold Fast the Faith: A Devotional Commentary on the Westminster Confession of 1647 and a few other shorter books.

All pictures courtesy of the Beinecke Rare Book and Manuscript Library.

Matthew Everhard Dr. Matthew Everhard is the Senior Pastor of Faith Evangelical Presbyterian Church in Brookville, Florida (EPC). He is a graduate of Reformed Theological Seminary (D.Min.), Malone University (BA, Bible and Theology); Ashland Theological Seminary (MA, Practical Theology). His dissertation was entitled "A Theology of Joy: Jonathan Edwards and Eternal Happiness in the Holy Trinity." He is the author of several books including Unknown: The Extraordinary Influence of Ordinary Christians and Hold Fast the Faith: A Devotional Commentary on the Westminster Confession of 1647. Matthew has been married to Kelly for fifteen years, and has three children: Soriah, Elijah, and Simone.
Published March 19, 2016April 8, 2016